Showing posts from April, 2019
Show All

A Roadmap for Failure: Essay for an Exhibition Catalogue March 2017 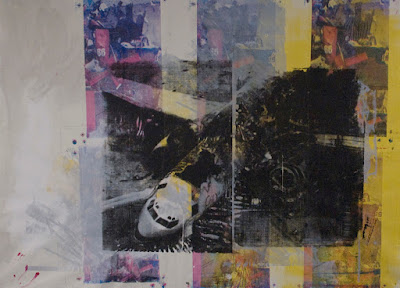 Joshua Y'Barbo,  Pan Am (2010)  Silkscreen on Canvas I originally wrote this for an exhibition catalogue. The exhibition was titled Glitch: The Aesthetics of Failure (2017). You may find more details about the exhibitions here .  A Roadmap for Failure Joshua Y’Barbo   March 2017 ‘ART COMES OUT OF FAILURE. YOU HAVE TO TRY THINGS OUT. YOU CAN’T SIT AROUND, TERRIFIED OF BEING INCORRECT, SAYING ‘I WON’T DO ANYTHING UNTIL I DO A MASTERPIECE.' Baldessari & Thornton, 2008 Art and design practitioners often experience glitches, errors, crises and failures in their individual practices.   Failure, as a concept, is a common aspect of art and design pedagogy and practice. Failure is also a psychological affliction often accompanied by feelings of rejection, loneliness, rumination, and loss and trauma, which groups and individuals often experience whilst developing and maintaining a professional creative practice. A problem arises when confronting failure and
Post a Comment
Read more
More posts